In October of 2016, I was exploring the Navy Museum in Lisbon. For a country with such a rich maritime history, I was somewhat disappointed with the museum itself. But as I was wandering through the bookstore on my way out, I came across this incredible book by edited by Annemarie Jordan Gschwend and K.J.P. Lowe: The Global City: On the Streets of Renaissance Lisbon. Something about the cover of the book grabbed me. I sat down in a corner of the bookstore and began to pour over the rich paintings in the book. These paintings presented an entirely new image of Lisbon in the sixteenth century that ended up completely changing how I teach European maritime expansion in the fifteenth and sixteenth centuries.

Despite knowing better, I often fall into the trap of thinking of Europe’s history as white history until quite recently. It’s not that I ignore the diversity of Europe, but I’m not doing things that challenge my own, and often my students’, mental image of what pre-modern Europe looked like. But recent scholarship about the Roman Empire and Medieval Europe has made clear Europe was never white. For many white nationalists and white supremacists, this historically inaccurate image of Europe as white is used to justify their racist beliefs about Europe and the West today. What recent articles have made clear is that there has always been ethnic diversity in Europe, but it wasn’t understood in the same way we think about race or ethnicity today. If we don’t challenge this assumption of a white Europe, we allow our students to continue to imagine historical Europe as an exclusively white region. As I sat there looking at these sixteenth century images of Lisbon, I was reminded of this other scholarship about diversity in Europe I was already familiar with and realized that the image I was presenting of sixteenth century Europe, at this moment of rapidly increasing global interaction, did nothing to challenge the assumption of Europe as white. I also realized that the paintings in my hand were the perfect primary sources around which to construct a new lesson for students.

I grew up learning about fifteenth through seventeenth century European history as theAge of Discovery, and this problematic name continues to be pervasive in much world history teaching. Discovery suggests that Europeans were previously cut off from other parts of Afroeurasia. Discovery also implies that Europeans were the first to reach the Americas (or the equally problematic “New World”) or that somehow the Portuguese were “exploring” the Indian Ocean. I’m sure the millions of people already living in the Americas would have found it amusing that they had just been “discovered” because Christopher Columbus had arrived, or that the already well established navigational understanding of the Indian Ocean was now being “explored” because Vasco da Gama had arrived. Just to start, we need to stop talking about discovery and exploration and start talking about expansion and encounter. Europeans in the fifteenth through seventeenth centuries were engaged in an imperial project of maritime expansion. In the process of expansion, they encountered other peoples from around the world. These encounters profoundly shaped the lives of all people involved. If we begin by discarding the benign language of discovery and expansion and replacing it with the more historically accurate language of expansion and encounter (and colonization in the case of the Americas), we can start to undo some of the Eurocentric interpretations of who Europeans were and what they were doing in this period.

It’s relatively easy to have students understand how European maritime expansion brought violence and armed trade into the Indian Ocean (Europeans themselves wrote extensively about the violence they used) or how spices were now arriving in European ports in greater quantities, but how did European maritime expansion in the fifteenth and sixteenth centuries affect the average person in European cities? With the framework of encounter in mind, I want to focus on two images of Lisbon that show how Portuguese maritime expansion transformed people’s daily lives in Lisbon and that also challenge our mental image of what Europeans looked like.

The first painting is from an unknown Dutch artist and was produced in the 1570s. The Chafariz d’el-Rei in the Alfama District shows the King’s Fountain – the city’s oldest and main fountain that was located right along the Tagus River. Annemarie Jordan Gschwend and Kate Lowe explain that the people in the painting were “ordinary people in an ordinary part of Lisbon.” As one looks carefully at the painting, it quickly becomes clear that the ordinary people of Lisbon – Lisboetas – were a surprisingly diverse lot. About half the people in the painting look to be of African descent. While many of these people of African descent were probably enslaved, we also know from other sources that there were also some who were freedmen and freeborn. We can also see many of the black Lisboetas interacting with white Lisboetas. Near the front of the fountain enclosure, we see a black Lisboeta man embracing a white Lisboeta woman. In the foreground of the painting, we can also see a black knight of the Order of Santiago. He is wearing black cape with a red cross, as well as white pants, kid boots, a white collar, and a white feather in his cap. The luxurious clothing suggests this black Lisboeta was economically successful as well. The painting shows the diverse community of Lisbon that came together at the fountain on a daily basis. By the 1580s, about 20% of Lisboetas were of African heritage, and they reflected a wide range of social standings. There were also a significant number of other peoples that lived in Lisbon during the fifteenth and sixteenth centuries. As students examine the range of people in this painting, they can begin to understand that Portugal’s expansion along the Atlantic coast of African fundamentally transformed the population of the city.

The second painting is from an unknown Flemish artist and was produced sometime between 1570 and 1621. It shows the busy commercial street the Rua Nova dos Mercadores. (At some later point, the painting was cut in half, which is why there is a line down the middle of the painting.) The Rua Nova no longer exists, but it was one of the busiest commercial streets in Lisbon. From contemporary maps of Lisbon, we know that the street was in the heart of sixteenth century Lisbon, as well as being right near the Tagus River. From other sources, we also know that the Rua Nova was one of the most well known commercial streets in Lisbon.

Looking closely at the people in the painting, we again quickly notice how diverse they are. There are a wide range of skin tones, and people in a wide range of dress. While some of the clothing styles are difficult to recognize, others are easy to make out. For example, in the lower right corner of the painting is an African woman wearing bright, patterned clothing carrying a basket on her head. Most likely she is an enslaved African woman. The range of people in this painting “and the routine activities depicted show numerous points at which black and white interacted.” There are other people wearing patterned cotton textiles, which would have been arriving from India.

Besides the increasingly diverse population, another way we can recognize how Portuguese expansion was transforming the daily lives of Lisboetas is through some of the animals in the painting. On the bottom left of the painting are two boys playing with a monkey. Monkeys are not indigenous to Portugal, and they most likely arrived in Lisbon from Africa. Even more surprising is the dog in bottom center of the painting with a bird in its mouth. A close examination of the bird reveals it to be a turkey. Turkeys were from the Americas, and had only just recently begun to show up in Europe. A chapter in book discusses how the inclusion of the Turkey in the painting most likely was a deliberate choice meant to highlight the new global connections and the way they were transforming Lisbon.

The details in these two paintings that I have discussed are just some of the ways in which students can easily see how European maritime expansion and colonization were profoundly affecting the lives of Europeans living in the larger cities. By choosing to look at these paintings with our students, we can begin to challenge the notion that European expansion was simply something that happened to peoples in the Americas, Africa, and Asia. Instead, students can see how this expansion fundamentally transformed Europe as well and contributed to a far more ethnically diverse Europe than we might imagine.

“Ruined and Plundered and Burned”: Historical Imagination, Lascars, and the Portuguese Arrival in the Indian Ocean

A discussion of teaching the arrival of the Portuguese in the Indian Ocean from the perspective of local sailors. 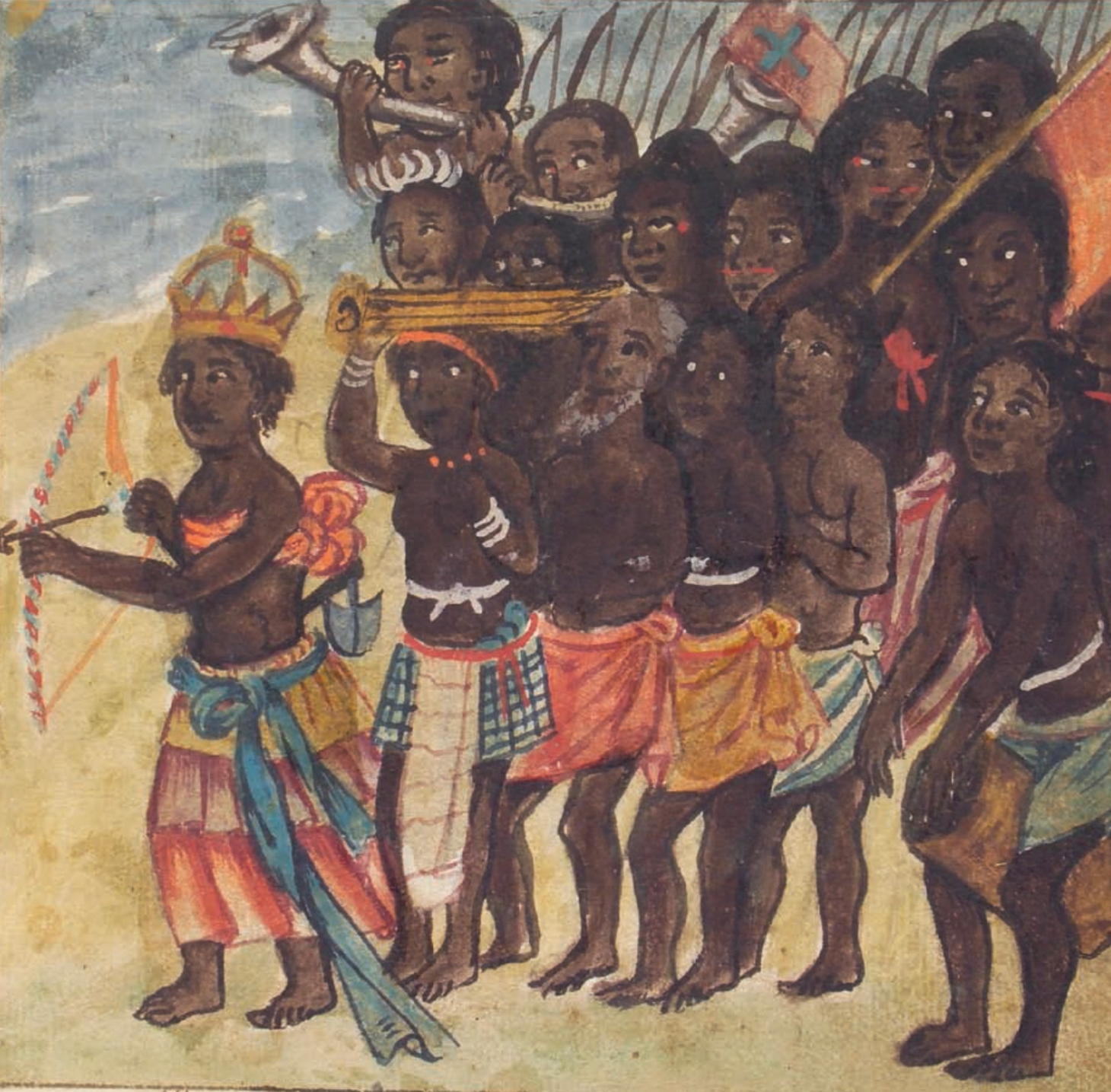